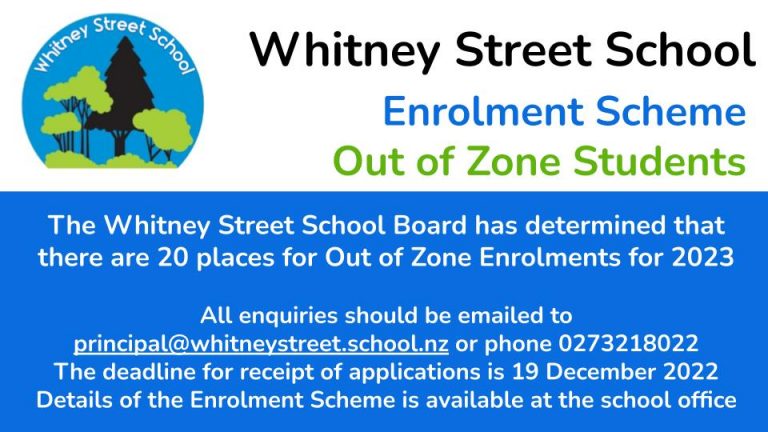 What are School Zones?
The Ministry of Education directs schools to establish an enrolment zone to prevent overcrowding and Whitney Street has an enrolment zone in place. Details of the zone are available by contacting the school office on 035783028 or sending an email to office@whitneystreet.school.nz.

What is Whitney Street School’s Zone?
Click here for the interactive website that may give you a clearer understanding. You can search by address or by the name of a school. More details (a written description) of our school zone is below this image. 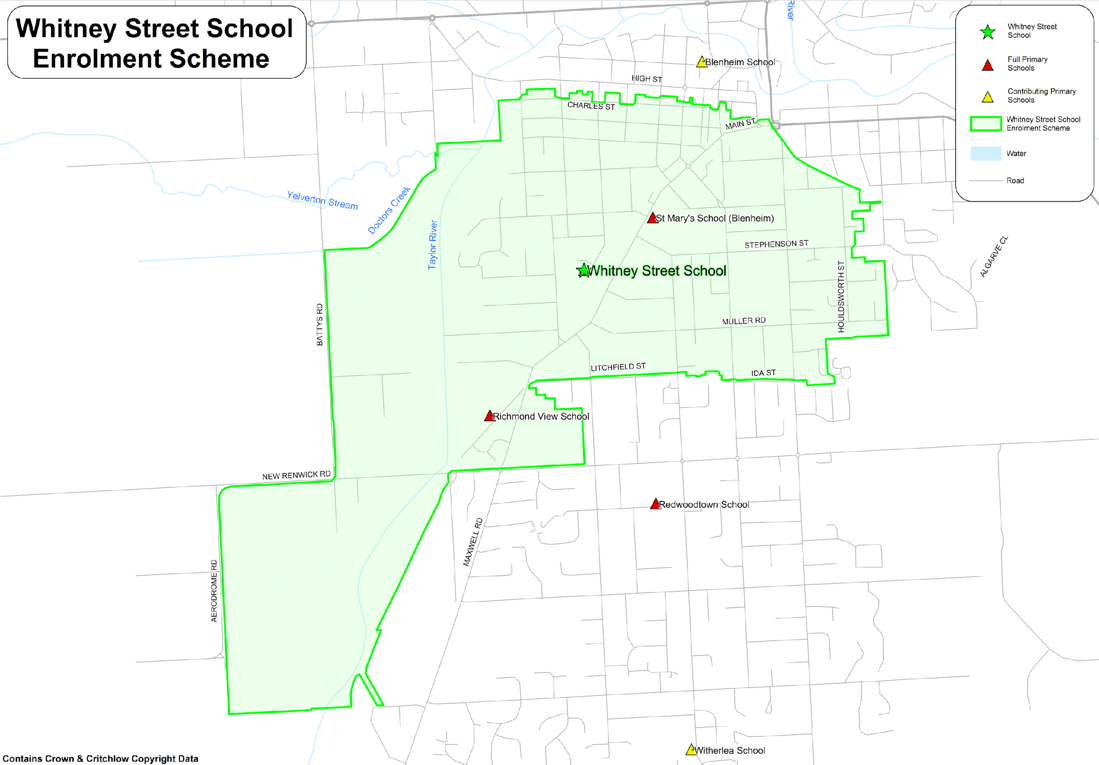 The guidelines for development and operation of enrolment schemes are issued under section 11G (3) of the Education Act 1989 for the purpose of describing the basis on which the Secretarys powers in relation to enrolment schemes will be exercised.

All students who live within the home zone described below (and shown on the attached map) shall be eligible to enrol at the school.

The Enrolment Scheme takes addresses on both sides of the boundary roads mentioned in the description unless otherwise mentioned.

This priority category is not applicable at this school because the school does not run a Special programme approved by the Secretary.

Out of Zone Enrolments

Each year the Board of Trustees will determine the number of places which are likely to be available in the following year for the enrolment of students who live outside the home zone. The Board will publish this information by notice in a daily or community newspaper circulating in the area served by the school. The notice will indicate how applications are to be made and will specify a date by which all applications must be received.

Applications for enrolments will be processed in the following order of priority:

First Priority
This priority is not applicable at this school because the school does not run a special programme approved by the Secretary for Education.

Second Priority
will be given to applicants who are siblings of current students.

Third Priority
will be given to applicants who are siblings of former students.

Fourth Priority
will be given to any applicant who is a child of a former student of the school.

Sixth Priority
will be given to all other applicants.

If there are more applicants in the second, third, fourth or fifth priority groups than there are places available, Selection within the priority group will be by ballot conducted in accordance with instructions by the

Secretary. Under Section 11G (1) on the Education Act 1989. Parents will be informed of the date of any ballot by notice in a daily or community newspaper circulating in the area served by the school.

Applicants seeking second or third priority status may be required to give proof of a sibling relationship.

Get the SchoolAppsNZ Mobile App

Get the SchoolAppsNZ Mobile App